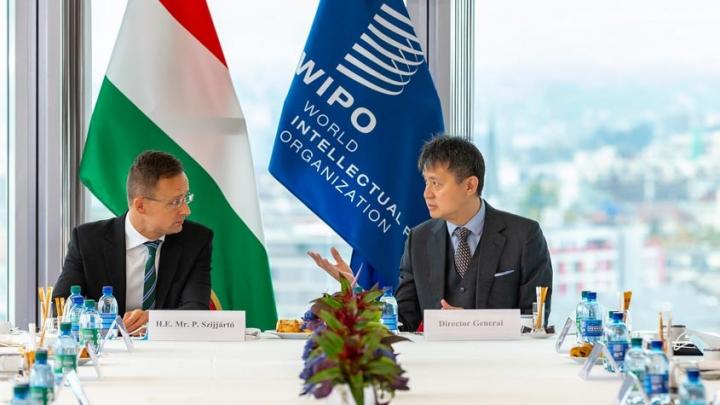 Mr Szijjártó congratulated Mr Tang who began his six-year mandate as Director General of WIPO on 1 October 2020. They covered several issues related to the cooperation between Hungary and WIPO, such as the promotion of the use of the IP system by SMEs and universities. They also agreed to begin a strategic dialogue on the innovation performance of Hungary in the framework of the Global Innovation Index.

Mr Szijjártó and Mr Tang discussed the importance of the protection of geographical indications and appellations of origin. The Minister informed the Director General that the ratification process of the Geneva Act of the Lisbon Agreement on Appellations of Origin and Geographical Indications is in the final phase and is expected to be completed in early spring 2021. Mr Szijjártó underlined that the protection of geographical indications enjoys a strategic priority in Hungary.

Minister Szijjártó also invited the Director General to pay an official visit to Budapest in 2021.

It was not Mr Szijjártó’s first visit at WIPO, he had met Mr Francis Gurry, former Director General of WIPO, in April 2020 when the Hungarian invention “Teqball” had been presented in the building of WIPO, on the occasion of the World Intellectual Property Day. During this current visit, Mr Szijjártó also met Tedros Adhanom, Director General of the World Health Organization and he opened the Consulate of Hungary in Geneva.