On 17th and 18th October 2017, the delegation of the European Patent Office (EPO), led by Mr François-Régis Hannart, Principal Director for European and International Co-operation, visited the Hungarian Intellectual Property Office. The delegation was received by President Viktor Łuszcz and Director General for Legal Affairs András Jókúti. The guests gained insight into the new developments and shift of emphasis in the work of the HIPO. The EPO delegation, headed by Principal Director Hannart, presented the current EPO Co-operation Policy and had a lively exchange of views with the Hungarian hosts on how the HIPO can take advantage of the trainings, IT tools and awareness raising services offered by the EPO. 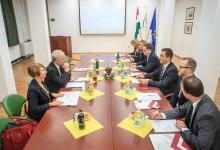